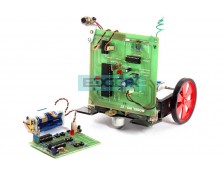 The project is designed to control a robotic vehicle by using a RF technology for remote operation. A low power laser light is interfaced for demonstrating the possibilities of destroying a distant object by its beam. An 8051 series of microcontroller is used for the desired operation.

At the transmitting end using push buttons, commands are sent to the receiver to control the movement of the robot either to move forward, backward and left or right etc. At the receiving end two motors are interfaced to the microcontroller where they are used for the movement of the vehicle.

The RF transmitter acts as a RF remote control that has the advantage of adequate range (up to 200 meters) with proper antenna, while the receiver decodes before feeding it to another microcontroller to drive DC motors via motor driver IC for necessary work.

A laser pen is mounted on the robot body and its operation is carried out from the microcontroller output through appropriate signal from the transmitting end. The laser light used is just for demonstration purpose and not a powerful one.

Further the project can be enhanced using DTMF technology. Using this technology we can control the robotic vehicle by using cell phone. This technology has an advantage over long communication range as compared to RF technology.

1) This line following robot can also be modified to a walking robot in any surface by using only one motor with homemade fixtures as per the detailed instructions give.

2) Similarly the same walking robot can be attached with special magnetic material as per instructions to climb a wall of any vertical metallic surface say a refrigerator body.