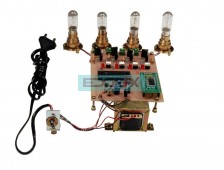 The concept of controlling home appliances using human voice is a interesting. This project is designed to control home appliances using a voice-controlled Android application. A Bluetooth device is interfaced to the control unit for sensing signals transmitted by the Android application. This data is conveyed to the control unit which switches on loads ON/OFF as desired. An 8051 series microcontroller is used in this project as a controlling device.

Remote operation is achieved by any smart-phone or Tablet with Android OS, upon a GUI (Graphical User Interface) based voice operation. The transmitting end uses an Android application for the voice commands that are transmitted to digital bits. At the receiver end, these commands are used for controlling the home appliances on and off.At the receiving end, the appliances are driven by power TRIACS through opto isolators that are interfaced to the microcontroller.

Serial communication data sent from the Android application is received by a Bluetooth receiver interfaced to the microcontroller. The program on the microcontroller refers to the serial data to generate respective output based on the input data to operate the TRIACS through Opto coupler IC.

Furthermore, the project can also add a feature of controlling the loads using touch screen operation.